What is the Difference Between Samsung A10 and A10e?

The Samsung A10 and A10e are mid-range smartphones released in 2019. Therefore, both are very affordable and popular phones. Here we see the difference between Samsung Galaxy A10 and Samsung Galaxy A10 to help you decide which phone is better for your needs.

What is the Difference Between Samsung A10 and A10e? 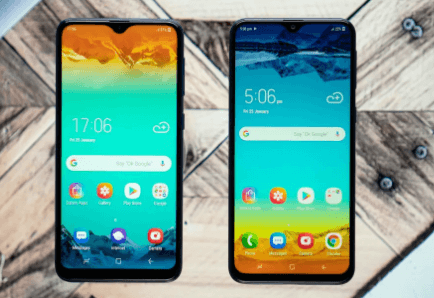 As mentioned above both phones are almost the same however there are some minor differences which we are gonna compare in this article, so without future dua let’s see the difference between Galaxy Samsung A10 and Galaxy A10e.

The A10 is slightly larger than the A10e. Therefore, it is more difficult to hold and use with one hand.

It is also heavier than the A10e. Both phones use glass for the front material and plastic for the back and frame material.

So neither is comfortable in the hand and has no premium builds.

Neither phone is waterproof. Therefore, be careful when using it near a water source.

Both the A10 and A10e have smaller bottom bezels. Beyond that, all other aspects have negligible bezels.

So both phones look modern and have a high screen-to-body ratio.

Both phones have similar build quality and design.

So both phones have relatively low resolution and pixel density.

With better IPS technology, the A10 display offers better colors and sharper images.

However, the difference is not that great.

Both phones have a notch for a selfie camera at the top of the display.

This notch is small and usually not distracting.

Both cameras are of average quality and suitable for everyday photography.

However, the pictures are rather soft on both phones. Especially night photos have low detail and a lot of noise.

Both phones can record 1080p video at 30fps on the main camera.

The video also has the average quality for a mid-range phone.

However, it is not stable, so it is difficult to shoot stable images while moving.

Both phones have similar camera quality.

Also, since this is a low-end chipset, both phones have average performance.

However, you can use both phones to play games in lower-quality settings.

Both have sufficient performance for everyday use.

Also, both phones have 32GB of internal storage. However, both support MicroSD for expandable storage.

Both phones have similar performance and are suitable for everyday use.

Both the A10 and A10e have headphone jacks. So you can easily use your favorite headphones on both phones.

However, both phones only have a single speaker. Therefore, it provides only average quality sound.

Both phones have similar headphones and speakers.

The A10 only has a micro USB port compared to the newer USB Type-C port on the A10e.

Both phones come with Android 9.0. However, both are upgradeable.

Due to their low processing power, both phones provide an average software experience.

For example, apps take longer to load, and sometimes the UI becomes unresponsive.

Samsung usually provides a lot of unnecessary software for their phones.

Therefore, you can free up some resources and improve performance by uninstalling this software.

This is useful for both the Galaxy A10 and Galaxy A10e.

Both phones have similar software and the latest Bluetooth 5.0.

Due to the larger battery, the A10 has a slightly longer battery life than the A10e

However, neither phone supports fast charging.

Galaxy A10 has a larger battery than Galaxy A10e.

Which Galaxy phone to choose?

When is the New iPhone Coming Out and How Much Will It Cost?

Samsung Galaxy A20 VS LG Stylo 5 Which is Better?

How Do I Stop My Battery From Draining So Fast?

How Does a Smart Ring Work?

Samsung Galaxy A20 VS LG Stylo 5 Which is Better?